Dexus has taken a 50 per cent stake in Atlassian’s $1 billion timber tower anchoring the government-backed tech precinct next to Sydney’s Central Station. 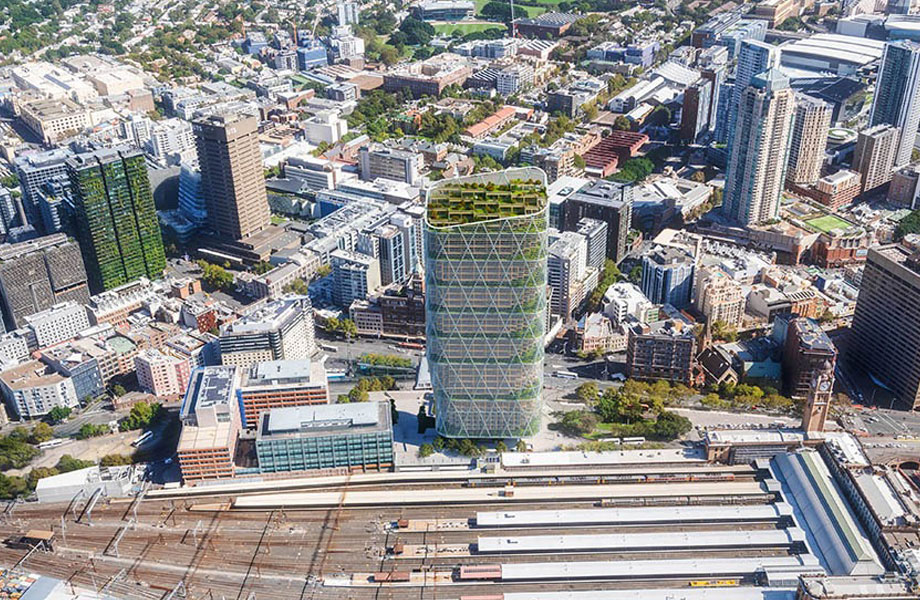 While the ASX-listed landlord declined to comment on the speculation, industry sources said that the transaction was struck on a “low 4s” cap rate—reflecting the strong occupancy profile of the Nasdaq-listed tech giant Atlassian, who will remain an equity partner in the project.

Based on comparable office rents—Poly’s 210 George Street is leasing for around $1,300 a square metre—and a sub 4.5 per cent cap rate, the 60,000 square metre office likely transacted around the $28,000 per square metre-mark.

Dexus pipped fund manager ISPT to the sought-after partnership and is understood to be finalising negotiations with Atlassian.

The timber skyscraper will add to its neighbouring $2.5 billion twin-tower Central station plans, which will bring 150,000sq m of net lettable area to the market once developed.

▲ Dexus is selling a 50pc stake in the Harry Seidler-designed Grosvenor Place.

Meanwhile, a 50 per cent stake in Dexus’ 44-storey Grosvenor Tower has hit the market. The group’s Grosvenor Place Holding Trust owns a 37.5 per cent interest in the tower, according to financial statements.

A Dexus spokesperson confirmed that the group is selling down its entire interest in the tower, which lost anchor tenant Deloitte to AMP’s Quay Quarter last year.

Chinese sovereign wealth fund China Investment Corporation is believed to have picked up another 50 per cent to add to its existing 25 per cent ownership in the tower, The Australian first reported last week.

“With Australia in a recession, we are preparing for subdued tenant demand and increased vacancy levels in our core office markets,” Steinberg said.

The country’s largest office landlord reported that it collected 98 per cent of its rent across the June quarter, while the group’s office portfolio occupancy remained steady at 95.6 per cent.